Designed to provoke an immediate reaction, the Strike King® Rage Swimmer looks great out of the water, and even better below the surface. Its sleek nose cone and softly ribbed body closely replicate the contours found in nature, and its thin, pancake-like tail pumps out frantic vibrations at any speed. Extremely versatile, Strike King's Rage Swimmer softbait offers an enticing swim—whether pinned to a jig, nose-hooked on a dropshot rig, or trailed behind a spinnerbait. Targeted for bass, but deadly on all other predators as well!

WARNING: This product can expose you to chemicals, including lead which is known to the State of California to cause cancer and reproductive harm. For more information go to www.P65Warnings.ca.gov. 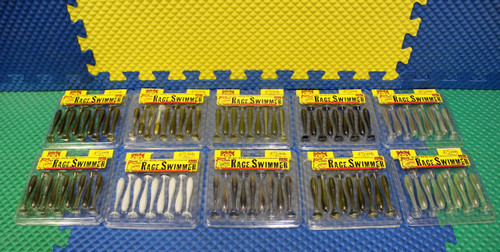